Домой События Digest of the Architecture of Sochi, October 26 — November 19 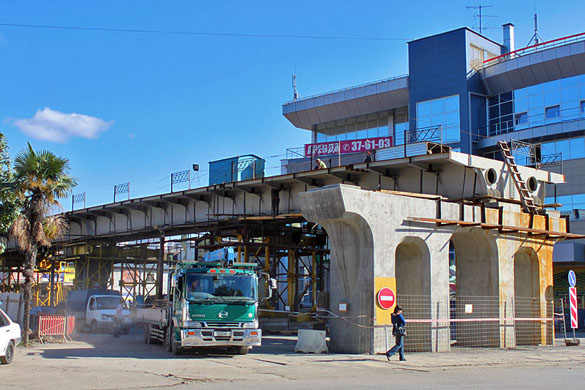 The revival of maritime communication
The Administration of Krasnodar Krai agreed to the documentation for land planning for eight marine terminals of the sea port of Sochi. They will be placed in the Imereti Bay, in the center of Adler, in Kourortny Gorodok, Khosta, Matsesta, Dagomys, Loo, and Lazarevsky.

Evgeny and Valentine, born in Rostov-on-Don, opened his workshop in 1987. During the carrier they carried out over 1200 orders from the people of the city of Sochi.

Preparing amendments to the law of architectural activity
The Russian Union of Architects has prepared a draft federal law «On Amending the Federal Law On Architectural Activity in the Russian Federation».

A second level is built at Gagarina — Donskaya junction Metal spans have already made in most pillars on Gagarina Street.

Station in Adler will be built over a rail road. NGO «Mostovik» has started construction of the main part of the railway station. At a height of 10 meters over the railway is the main lobby, a distribution hall for passengers.

Igor Yaroshevsky: «The hostages of … Freedom»
In one chapter of the book «Architecture and Power» (2001) it’s talked about the situation in the architecture at the time of Perestroika, which was the beginning of urban chaos in Sochi. Complex «Caravela Portuguesa» («Caravel of Portugal») will be built in Dagomys. The project is executed by experts of Portuguese architectural bureau Miguel Saraiva & Associados. The architects of the company «Gnuchev & partners» company developed voluntarily the architectural concept of the reconstruction of the seaside promenade between the Sea Port and Pushkin Avenue.

Project of reconstruction is already selected. But it’s worth to get know other development proposals. For example, Eldar Absudov, a student at the 6 th year of the Sochi State University for Tourism and Recreation (SGUTiKD), Department of Design, has proposed reconstruction project of the shallow berth in Sochi seaport.

29 new parking spaces will be built in Sochi by 2012
Parking construction was one of the main issues at the meeting of the operational staff for the traffic organization in Sochi on Friday, November 12. Construction of covered parking is included as a special paragraph to the Olympic reconstruction program in all areas of the city.

Public Hearing on November 10, 2010
On Wednesday, November 10, 2010 public hearings has been held in the Administration of the Central district. Two issues were presented: assessing the environmental impact of the project of engineering network construction on sites of resettlement fund in the area of Jan Fabricius street and installation of new high-voltage network to the Adler Power plant. Igor Yaroshevsky outlined the stages of reconstruction of the seaside promenade in separate topic of his book «Architecture and Power» (2001).

This project designed by PRP architects was used as the basis for the project of Olympic University. Although this complex in this form never be built.

Public hearing on November 18, 2010
A few statements were examined. The hottest debate dawned by the transfer of the beach of Imereti Valley from zone R-1 (public beaches) into zone RK (medical and health institutions) which allows high-rise buildings up to 33 meters in area. This website uses cookies to improve your experience while you navigate through the website. Out of these, the cookies that are categorized as necessary are stored on your browser as they are essential for the working of basic functionalities of the website. We also use third-party cookies that help us analyze and understand how you use this website. These cookies will be stored in your browser only with your consent. You also have the option to opt-out of these cookies. But opting out of some of these cookies may affect your browsing experience.
Necessary Always Enabled
Necessary cookies are absolutely essential for the website to function properly. These cookies ensure basic functionalities and security features of the website, anonymously.
Functional
Functional cookies help to perform certain functionalities like sharing the content of the website on social media platforms, collect feedbacks, and other third-party features.
Performance
Performance cookies are used to understand and analyze the key performance indexes of the website which helps in delivering a better user experience for the visitors.
Analytics
Analytical cookies are used to understand how visitors interact with the website. These cookies help provide information on metrics the number of visitors, bounce rate, traffic source, etc.
Advertisement
Advertisement cookies are used to provide visitors with relevant ads and marketing campaigns. These cookies track visitors across websites and collect information to provide customized ads.
Others
Other uncategorized cookies are those that are being analyzed and have not been classified into a category as yet.
SAVE & ACCEPT
Posting....